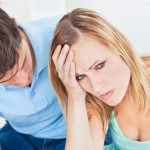 Someone once said, “Marriage is the perfect union of two imperfect people.” I don’t think that could be truer. No matter how hard you try you will hurt, upset and offend your spouse. It’s great when that happens and you realize what a bonehead you’ve been and immediately apologize and make it right. But this becomes a whole lot harder when you feel like you are ‘in the right’ or even justified by what you’ve said or done. The problem with apologies is that they have to be sincere to be of any value. A simple ‘Sorry’ won’t work especially if you are apologizing for an offense you’ve done numerous times! In this case the apology seems trite and disingenuous.

So how do we handle this in marriage? Here are a couple of thoughts…

First keep short records of each other’s wrongs. It can be very tempting to hold onto something our spouse has done that hurt you and then to use it later as leverage in a subsequent argument. Or you might even try to use it to protect yourself the next time you do something wrong. “I know but you did this to me…remember?” I have never seen either of these approaches effective for building a strong relationship! Instead do your best to keep short records of each other’s offenses…If you are the offending party – sincerely apologize (include in the apology what you will change so that it most likely won’t happen again)….If you are the offended party express how the offense has made you feel, graciously receive that apology and move on. Many of the issues we as married couples scrap about aren’t that big, so as much as possible, don’t make them bigger than they are.

Second, from time to time, it will likely be necessary to open up the files you have on each other and sort through what’s there. This is a very intense process that will require a significant amount of time and emotional energy. Over time it is just natural for us to pack away certain amounts of issues and hurts that have been inflicted on us by our spouses. Remember ‘marriage is the perfect union of two imperfect people’ and no one knows that imperfection better than the person who is closest to us. Let me add that these file opening sessions are not likely things you can plan for, they just seem to happen (usually after an especially bad disagreement) and you will just need to put your other plans on hold and step into it. I can remember one of these times in our marriage (yes there has been more than one). I don’t remember what lead up to this conversation but I clearly recall my wife and I being in an emotionally gut wrenching conversation on the back deck of our second home. She began to share with me not so much specifics of things I had done wrong, but more how my general, constant offenses had affected her over time. Her honesty broke my heart as I tried to understand how I had hurt her. Very quickly both of us were unpacking our own emotional baggage as we sought to try to understand and love each other in our imperfections. There were a lot of tears that day from both of us and when it was all done there was a deep sense of forgiveness, a fresh commitment and a new start in our marriage. I can’t imagine where our marriage would be if we didn’t have those times where the files are cleaned out and our love and commitment to one another is renewed. Un-forgiveness, bitterness, and resentment are poison to a marriage. You can handle a bit of it but little by little over time it builds to the point where it becomes fatal. Therefore, deal with it often and fully.